Would you go on holiday to a country where the prison population is 71% foreign nationals, and where the government proudly publishes this statistic, as if to say, foreigners are filth?

Well, this is indeed the case in Switzerland, here are the official statistics from the Swiss government in English or French. Extract is below. 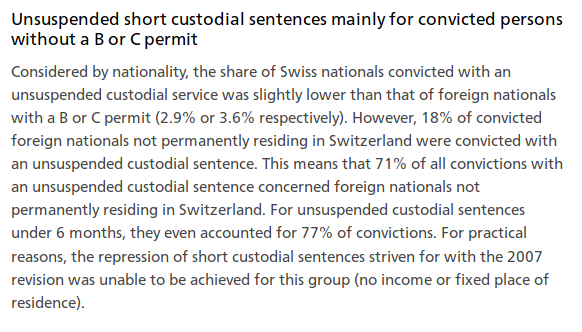 Would you go on holiday to a country where the prison population is 71% foreign nationals, and where the government proudly publishes this statistic, as if to say, foreigners are filth?

Everyone thinks of Switzerland as a safe country, where the rule of law is established -- when nothing could be further from the truth.

Now, not only are foreigners apparently specifically targeted -- unless you believe 71% could be a naturally occurring figure -- but the police can actually arrest you without any proof whatsoever, even for a crime as serious as murder, and hold you incommunicado for up to 48 hours. That means after your initial arrest, you see nobody, not even your lawyer for 48 hours. Although, usually your "lawyer" is in fact the "duty lawyer" who is paid by the police. If he doesn't play ball, they don't invite him back.

In my case they held me for about 9 hours in my own home (I called them to report a suicide) before I saw a lawyer, and during that time they refused me access to toilet facilities and drinking water. Numerous threats to my physical person were made unless I signed away all my rights and agreed to let the police "bypass" normal procedure, take DNA samples, and nude photographs. This process is designed to break you down and force an innocent man to confess, because torture was thus ever intended.

If you like being stripped naked in a room full of people of both genders, I can highly recommend a trip to Switzerland

If you like being stripped naked in a room full of people of both genders, I can highly recommend a trip to Switzerland; even more so if you like being handcuffed and paraded around naked in the freezing alpine temperatures (in my case 5*C) to make you understand who is the boss. The Swedes like the naked in the snow bit, but being somewhat more cultured than the barbaric Swiss, they do it after a boiling hot sauna, and they don't force anyone. The sadistic Swiss prefer to force others to do it.

Now, I know many people are exhibitionists, and the Swiss have a special treat for those people too; part of their investigative procedure is to give you a "forced medical", and even after the doctor has said there is nothing unusual, they like to force you to allow them to take extreme close ups of your private parts. I can only imagine that the exhibitionists among us would simply love the attention.

So, before you pack your bags for Verbier, remember if anything happens, and you come into contact with the Police, they will be looking for any opportunity they can find to hone their sadistic skills on you.

Not only are the Swiss police in the canton of Valais filthy sexually depraved animals, but they are so, so, sadistic and really get off on torture.

Remember all the major Swiss ski resorts are in Valais: Saas-Fee, Zermatt, 4 Valleys, Verbier, Cran Montana, Ovronnaz. Also plenty of festivals lke "Avalanche Festival" in Marécottes. If you've had a drink and you come into contact with these sadistic torturers, it's going to be a long night indeed because they will throw out your testimony.

If you smoked a joint 6 months ago at a party, the Swiss police will call you a dirty drug addict whose testimony is unreliable. They will outright deny everything. You think about that for a moment.

In fact in my case they took a hair sample to test me for drugs going back a year. It came up clean, but remember, if you smoked a joint 6 months ago at a party, the Swiss police will call you a dirty drug addict whose testimony is unreliable. They will outright deny everything.

Why else do that test? They had blood & urine which goes back almost three months. You think about that for a moment.

Its impossible to say how many innocent people were sexually abused and tortured by Valais police, but remember no lawyer from that canton will fight your case, and it took me six months to find a lawyer who would. I think most victims give up and plead guilty to something just so they stop the torture.

I went 9 hours without water after a 10km bike ride to my house.

Could you go that long after a day skiing?

Why risk putting yourself through that?

Don't risk being tortured and humiliated all night by the Valais police;

Go skiing in Italy or France instead, and stay out of Switzerland.

That's the cost SO FAR to me as a result of these utterly false murder charges, and the incident is still ongoing. Got legal protection insurance?

THEY WON'T PAY UNTIL YOU ARE ACQUITTED, SO YOU HAVE TO PAY CASH IN ADVANCE FOR EVERYTHING, AND THE SWISS POLICE KNOW THIS SO...THEY DRAG IT OUT TO FINANCIALLY RUIN YOU.

In May they verbally agreed I had no case to answer but yet, inexplicably, the investigation is still  "ongoing".

Holidaying in Switzerland is not only for the rich, but risk takers too.